Ota Floriculture Auction Co., Ltd holds the award ceremony of “FLOWER OF THE YEAR OTA” which annually aims to praise outstanding flower growers who created trends in Japan’s flower industry. From the approximately 200,000 varieties of flowers supplied to our company in 2020, four varieties (and producers) have got awards.

Award-winning varieties are selected by independent experts in Japan’s flower industry among  the flowers nominated by OTA Floriculture Research Institute LTD (a subsidiary company of Ota Floriculture Auction Co., Ltd.) based on data analyzed from many aspects. This award is unique in the point that winners are selected from the viewpoint of “trends”, not only from the one of “quality”.

The signature color of this year in Japan is pink, especially with blueish and grayish tones. Dried flowers continue to gather popularity, and it extends to the trend of dry texture and shabby-chic color even for fresh flowers

Let’s take a look at all prize winners! 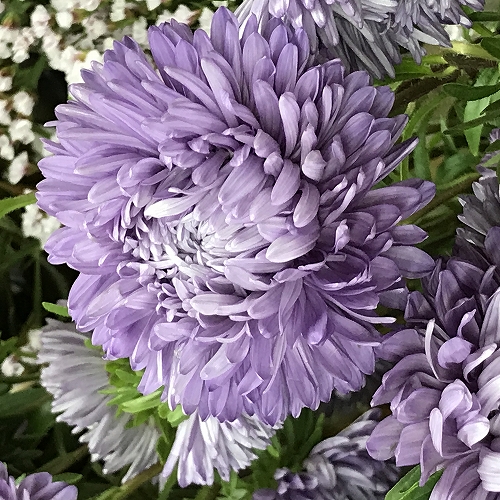 While overall flower trend is moving towards small flowers, Mash lavender has got attention unusually as a large-blooming flower. This flower is a super-large-blooming aster with a diameter of about 7 cm, which broke the old image of aster together with a surprise. It has much of presence even with one stem, and that makes its beauty stands out more. In addition, it has an advantage of long vase life. Although the number of flowers produced in Japan is generally declining, the number of asters has been increasing in recent years. Its grayish color creates a unique atmosphere in line with the recent trend. Taking advantage of its comfortable and warm climate all through the year, Kagawa Prefecture is expected by the Japanese flower industry to play an important role of flower production in winter. Incidentally, this is the first time for a grower in Kagawa Prefecture to have got the highest award. 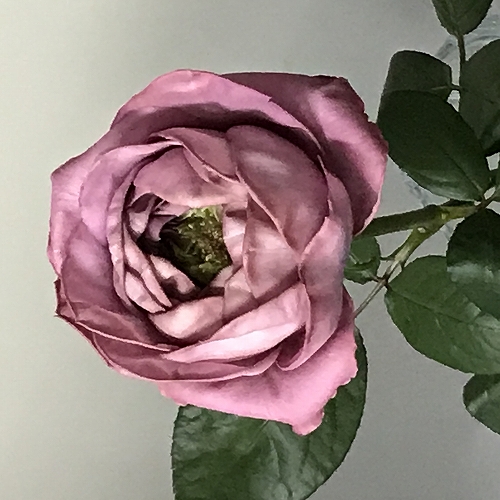 The excellence award has been given to the original variety of the Yagi Rose Breeding Farm bred by Mr. Hayato Yagi. Bluish dry-textured petals and classic shabby- chic leaves give unique impression we have never had. You cannot forget it once you have a glance. Mr. Yagi got a clue about a future trend of roses during his stay in the Netherlands for his study. When he saw Vase at his first sight on his farm, he intuitively found out that it would become popular, but his mentor – his father – objected saying, “This is no good.” Even so, he continued to improve the variety with belief in his mind that he wanted to develop a new rose variety which stands out even with one stem inserted in a vase. The variety name of Vase is named after from the flower vase. The Vase has been a blockbuster rose getting on the bandwagon of the recent trend. Shizuoka Prefecture is a famous flower producing area, and the yield of cut flower roses is the second largest in Japan. 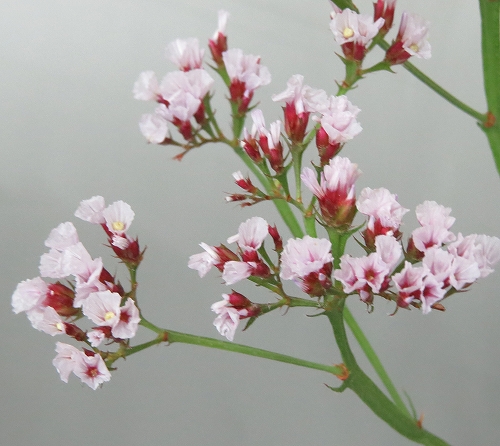 Limonium Sinzii Silver is an elegant and pretty variety with lots of dry-textured blueish-pink florets. The part that looks like a petal is a calyx, and then it can last long, and can be also used for swags after dried. The color of calyx matches the recent color trend. The annual yield of Limonium in Wakayama Prefecture is the second largest in Japan, but it most contributes to supply of Limonium to the market in winter, taking advantage of its warm climate. Limonium ranks fourth in the domestic flower production, after Chrysanthemums, Carnations, and Roses. It is obvious that Limonium is a required item among all flowers. Recently, new and lovely varieties have been developed which can be used to flower bouquets. This is the first time that growers in Wakayama Prefecture has won the award. 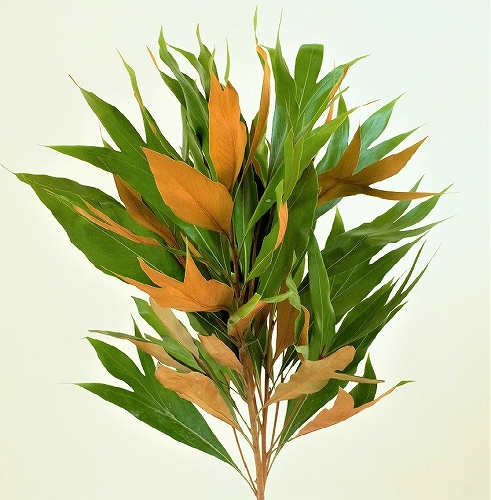 Leaves of Grevillea gold are fascinating. The color of the leaf surface is fresh green, and the back is velvet-textured copper gold. It is a beautiful plant with two contrasting expressions in one leaf exported from Israel. It can be used for various purposes such as bouquets, swags, and wreaths in both dried and fresh. It has got popularity from florists because adding one leaf of Grevillea to the flower arrangement increases sense of design. Just bundling several leaves of Grevillea also gets attention as an interior decoration.
The award winner, YMS Co., Ltd. is one of the leading flower import companies in Japan, importing flowers from more than 20 countries. They always try to develop market-oriented strategy and consulted with Israeli growers from an early stage requesting for larger production. And the Israeli growers responded to their request. Such effort from both sides has led to this award. Prior to the Christmas season, it will definitely get more attention.

Translated and edited by Y. Fuchu